Tuesday, April 4, 2017 — Ottawa Community Housing’s Winthrop community unveiled their common kitchen renovation on Friday, March 24th. The new kitchen will serve as a community gathering space for the near 200 tenants that live in the area. 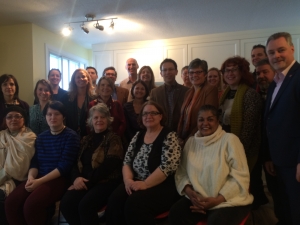 The kitchen is located in Winthrop’s community house – a centre that offers programming and support to the families and individuals living in the area. The project was funded by PCL Construction and United Way Ottawa and was made possible by the OCH Foundation.

The OCH Foundation has been involved in several recent community revitalization projects, including the construction of an outdoor common area at OCH’s Golden Manor and a youth led mural painting on Somerset Street West.