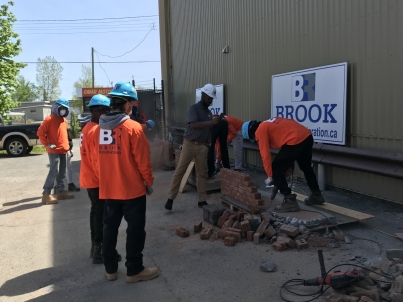 A local restoration company has taken it upon themselves to create jobs for young adults in OCH communities. Jeff Grist, President of Brook Restoration, and Bara Al-Obaidy, Vice-President of Brook Restoration’s Ottawa Division, approached the OCH Foundation with the intent of launching a ten week pre-apprenticeship program for OCH youth. With the support of several like-minded, local organizations, ten youth participated in the program.

The program began with a two-week in-class training course that took place at Brook Restoration’s head office. Attendees received various types of safety and trade specific training including WHMIS, working at heights, power tools, masonry, among others. They then moved on to eight-weeks of on-site training which was held on various Brook Restoration job sites, under the supervision of their foremen.

The OCH Foundation partnered with the Banff Avenue, Confederation Court, and Russel Heights Community Houses in order to find youth for the program. After an evening long workshop during which OCH youth learned what it meant to work in the restoration industry and a series of interviews, ten youth were selected to participate in the program.

Brook Restoration has since expressed interest in running more editions of the program. If you are an employer in the trades and would like to take part in the program, please contact Scott Fowler at 613-518-2098.